How to get rid of any bad habit?

A modern framework to become sober and healty in less time than ever.

A smoker decides to smoke "just one" in a year without cigarettes, a skinny colleague goes off the diet for sweets, and a friend drinks for the third day after months of “quitting". "People do not change", they say in such cases. But science has proved (and long ago!) that this is not true. People can change behavior and habits, just not everyone does it right.

And how is it right?

James Prochaska, a professor of psychology at the University of Rhode Island, and his colleagues found out and described it.
James Prochaska, the founder of the transteoretical model. 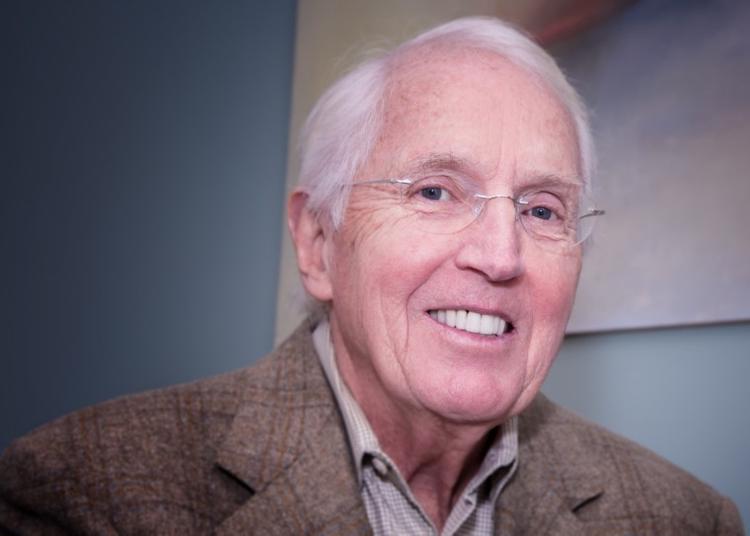 In the late 1970s, they began to study the experience of people who tried to end their bad habits.

And they discovered that those who succeeded did it by the same scenario. Scientists called this scheme a transteoretical model of behavioral change (TTM).

And it proved to be effective, now it is used worldwide to solve serious psychological problems: rehabilitation of addicts, therapy of depression, anxiety, panic attacks, interpersonal problems and others.

What do Freud and the white rat have in common?

The question of behavioral changes interested Prochaska in his youth, it was because of him he chose the profession of psychotherapist. And there was a personal reason for that.

"I could not help one person to cope with the depression and alcoholism that killed him. Since this person did not trust psychotherapy and denied the problem itself, all difficulties lay on the shoulders of his loved ones. And although we tried to help, no methods worked. This man was my father. After his death, when I was in my first year of college, I got seriously involved in psychology hoping to understand what happened. I was wondering if there was any way to help people like my father," he says in the book "Changing for Good".

Starting to study as a psychotherapist, James was surprised at how many different schools, theories and approaches exist. In the 50's there were already about 36 separate psychotherapeutic directions (nowadays their number has already exceeded 400). All studies at the university consisted of studying the differences between approaches. James, on the other hand, was wondering if these schools had something in common?

It turned out that they did. Although different areas of psychotherapy explained the causes of a patient's problems differently, almost all came together in terms of mechanisms of change.

Prochaska highlighted the most effective methods that were used by the leading psychotherapy schools at that time (he wrote a book about this in the book Psychotherapy Systems). For example, he borrowed "awareness raising" in psychoanalysis, and behavioral change through reward from radical behaviouralists.

According to the TTM, each stage of behavior change has corresponding processes of change. For example Conscious-raising, self-reevaluation, dramatic relief, and social liberation are the processes of change at the Contemplation stage. Each Sober One task involves one of them.

According to Prochaska's idea, those who used these methods in combination should have been successful in changing their habits. The main thing that remained was to confirm it in practice.

Learning more about the problem, analyzing your attitude to it, observing your behavior and emotions is the basis for successful changes.

Humans are a social species. We are guided by our social environment and accepted norms of behavior. To change successfully, you have to get rid of the social pressure that provoke your bad habits.

The essence of the method is to cause catharsis, a strong, often unexpected emotion related to the problem.

It helps to see how and where your problem conflicts with personal values. As a result, person not only starts to think differently, but truly feels how the life should improve.

The first step is personal: promise yourself to change. The second step involves openness: announcing the decision to others. Thus the person forces himself/herself to follow the chosen course, because in case of failure he/she will feel guilt before those who knew about your decision.

Replacing negative reactions with positive ones. For example, an alcoholic may choose to go jogging when he or she has the urge to drink. There are manyways to counterconditioning, the main thing is to find those that fit oneself.

Influence of the environment

It is important to arrange your surroundings so that the likelihood of a negative event is reduced to zero — for example, remove drugs or alcohol from your home.

Rewards are often used successfully to induce behavioral changes. An example of reward is a gift after achieving a certain goal. For example, bought with money saved by quitting a bad habit.

Self-change does not mean refusing support or other forms of help from others. Talk to a therapist, friend, relative or priest. A supportive relationship will provide you with support, care, understanding and approval. 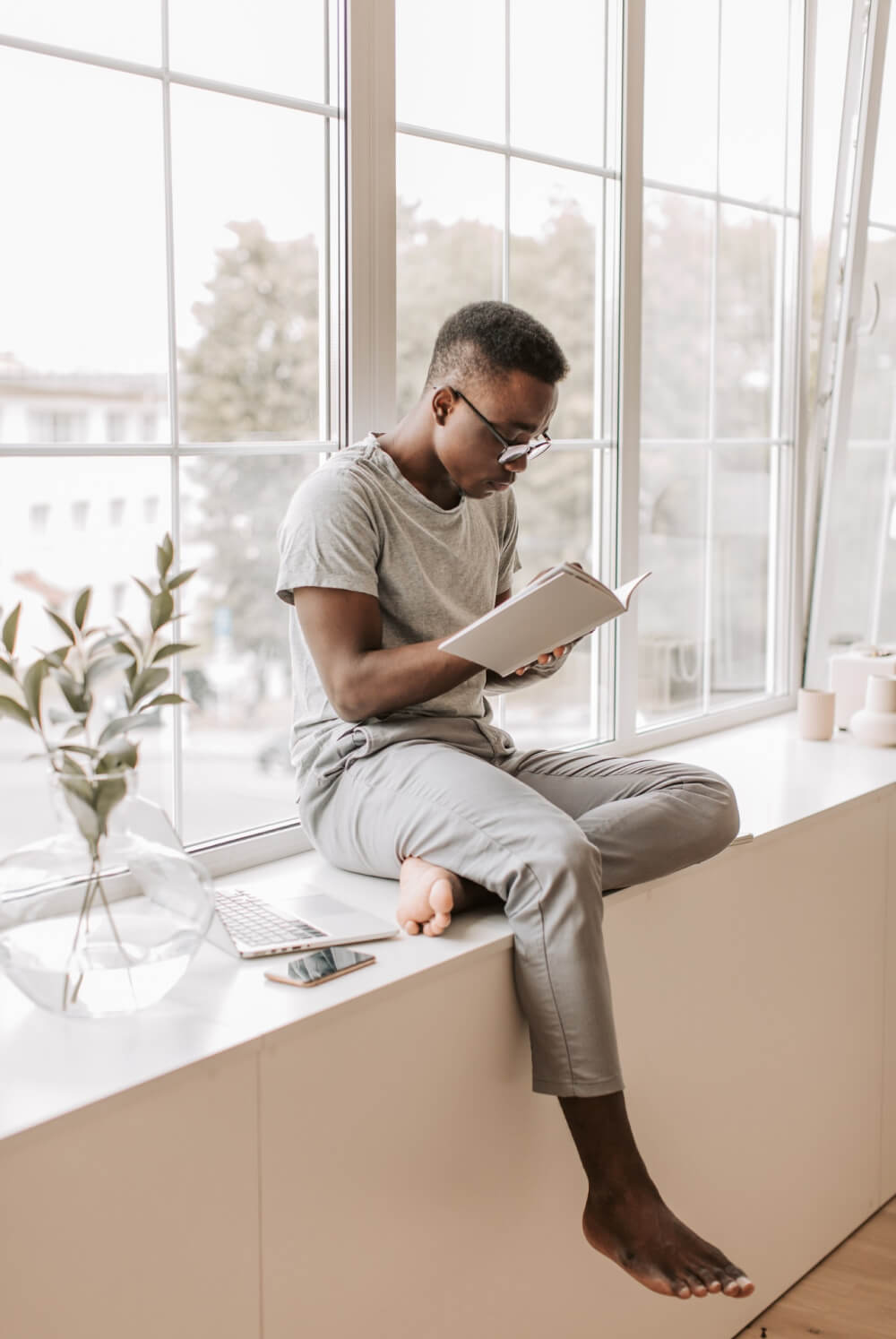 According to TTM, those who used these methods in the complex, had to successfully change their habits.

"What period are you asking about?"

Prochaska and his PhD student Carlo Carlo DiClemente started with a little research among smokers who tried to quit. Their goal was to find out which of the 9 methods they used and how often.

"We interviewed 200 people who tried to quit smoking, mostly those who did not use professional help. The survey included poor farmers living in trailers in Rhode Island fields, and businessmen working in offices in the city center. I remember especially well one middle-aged lady.
‍
I asked her how often she used this or that technique of change. She replied, "It depends on what period you're asking about. Sometimes I used some technique more often than others, and sometimes I didn't use it at all."

This helped Prochaska to move forward with the idea that the changes are gradual, in several stages. And it seems that for each stage, you need a different set of methods. But what kind of methods?

Professor Prochaska and a thousand smokers

And so in the late 70's Prochaska with colleagues began a large-scale study among smokers who tried to quit. Now they were interested in whether there was a connection between the stage of change and the methods used by people. The research involved 1000 people from different cities and states, different sexes, ages, and different social level.

But when scientists moved from interviews to analyzing the data obtained, the results did not add up to a pattern.

"When we finally entered all the information into the main computer, the result was a chaotic set of numbers.

My data analyst has announced that the study is meaningless that my belief that it is possible to use the stages of change to combine powerful techniques to change competing psychotherapy systems is not supported by numbers.

When I was completely desperate, it suddenly hit me. One day at about 1 a.m. I decided to remove the group of relapsed people from the data collection, because the relapse was not part of our model of stages. Probably, it broke our results in the same way as it frustrates people's plans to change. As soon as I removed these data, the picture was formed.

Thus, the authors of TTM found that all those who were able to successfully overcome the harmful habit, consistently passed through five stages. And at each stage, they used a strictly defined set of methods of change. Those who used the methods chaotically, usually broke down and went into relapse. As a result, scientists formulated a simple and universal scheme of 5 stages and published the first results in 1983.

The same publication about the stages and methods of behavioral change. In the beginning, Prochaska and Carlo DiClemente did not yet identify the stage of Preparation. 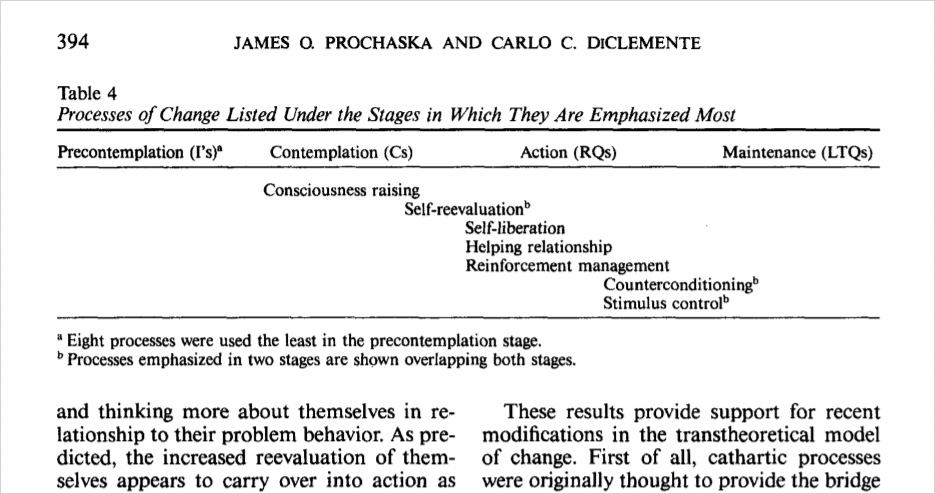 Over the next 40 years, they continued to study how people with different behavioral problems engage in self-change. These studies also confirmed that TTM works, with a total of 150,000 participants over the years.

The most common version of TTM is the five-stage version. In this form, it is also available on the official website. 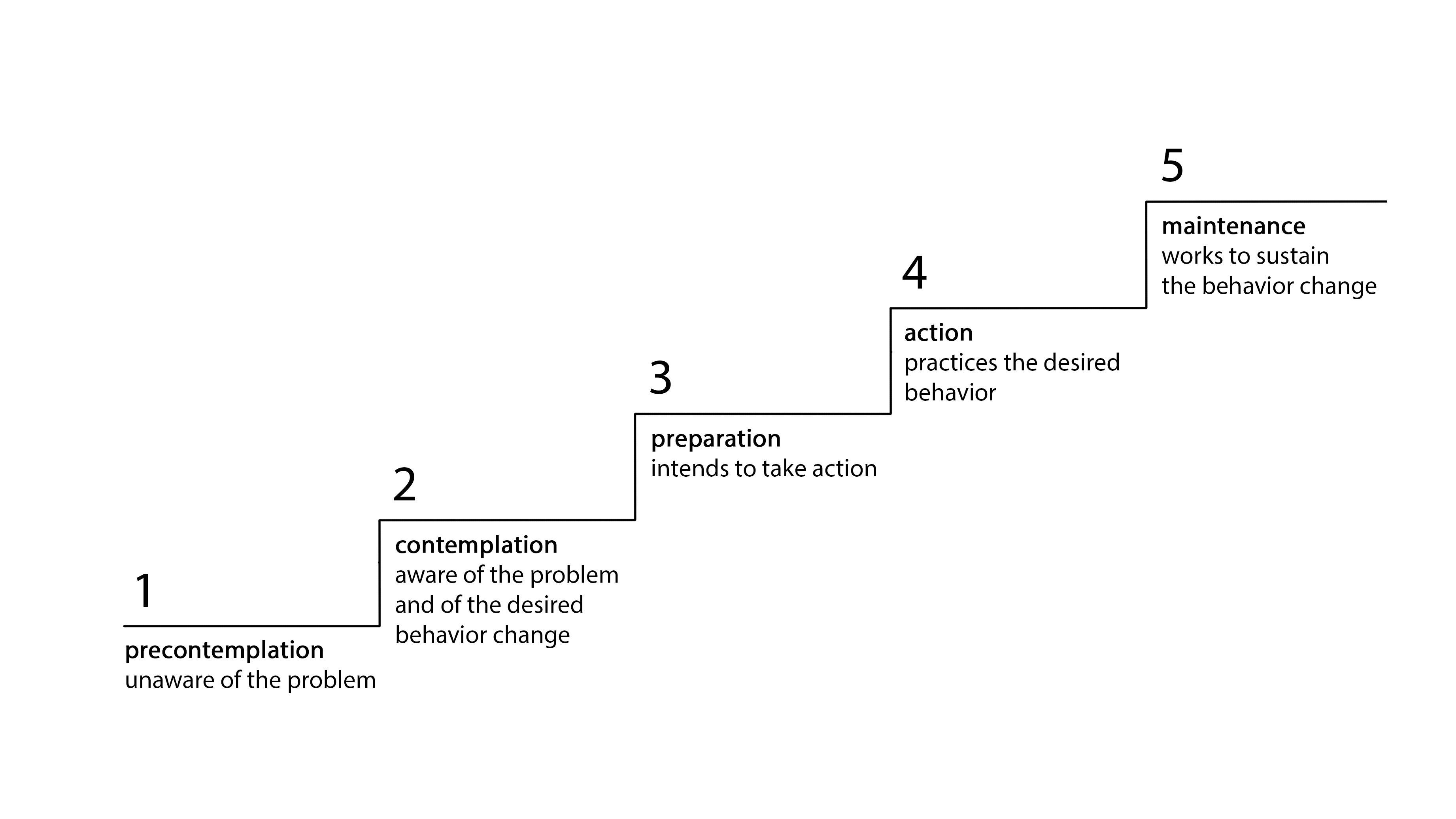 How do we change

In three key conditions to get the result.
01.
Sequence is important.
According to the TTM, in order for the self-change to be successful, it is necessary to pass five stages in succession.
‍
Those who tried to change, but failed, are more likely to blame themselves or circumstances. The authors of the TTM say otherwise: the cause of failure is in the imperfect plan, not in the person.
02.
Methods must match the stages.
Each stage corresponds to certain methods from the TTM's arsenal — awareness raising, revaluation of values, emotional awakening, supporting relationships and others.
‍
For example: at the Contemplation stage, those who successfuly quited, trained a conscious attitude towards themselves and the world, trying to learn more about their problem. At the Action stage, they were doing something else: reshaping the environment and the circle of communication, using the support of loved ones, rewarding themselves for their efforts.
03.
The process of change is gradual.
A common mistake is to think that the action is a change. "Today I have given up smoking, so I have changed!". But the action is just one of the stages of a larger and longer process.

The authors of TTM say that it takes at least six months from contemplation to save the changes, depending on what the problem was. And the stage of preserving the change in some cases lasts a lifetime.

And what do we have?

The idea of step-by-step changes became the basis of the Sober One. We have supplemented the strict universal scheme of TTM with effective methods from other psychotherapeutic approaches.

Altogether they are able to solve the problems of addictive behavior. The effectiveness of every method is confirmed by clinical studies and years of practice.